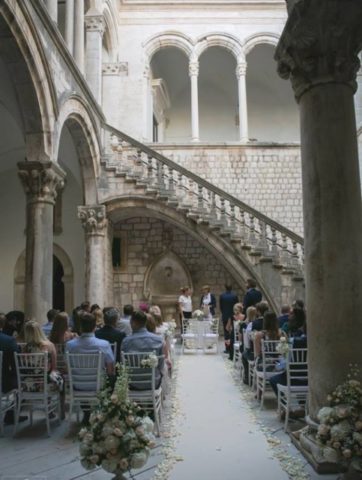 The Rector’s Palace, was the administrative center of the Dubrovnik Republic. Its style is basically Gothic, with the Renaissance and Baroque reconstructions.
In the 15th century, the Palace was destroyed twice in gunpowder explosions. Restored by Onofrio della Cava in the late Gothic style after the first explosion in 1435, the Palace got its present-day size with the central atrium and front portico.

Rector’s palace is located within Dubrovnik city walls. On your request a special permit may be issued thus allowing wedding limousine entrance.

The Rector’s palace atrium today is one of the most impressive ambient for classical and chamber music concerts traditionally played here, especially during the Dubrovnik Summer Festival. Atrium is decorated with one small fountain in Gothic style dating to the 15th century and the bust of the Dubrovnik’s famous seaman and merchant Miho Pracat, the only such laurel given to the common man in The Dubrovnik Republic.
Being one of the top Dubrovnik ‘s attractions we highly recommend these locations for your Dubrovnik wedding reception.